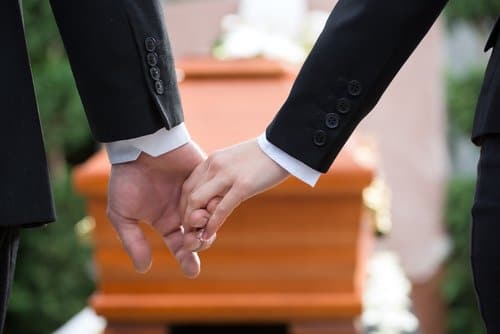 Wrongful Death Lawsuit of an Unmarried Partner. Today’s guest blog is by The Hanneman Law Firm. The opinions expressed by the author in this and all guest blogs are not necessarily those of Attorney Mark E. Hall.

Facing the loss of loved ones is a tough situation in anyone’s life especially when your entire life disrupts because of the loss. In addition to being involved romantically, you may also be dependent financially on the deceased person.

A wrongful death lawsuit is a legal way for the relatives of the deceased to seek compensation for the losses which includes loss of wages, medical and funeral expenses, as well as compensation for lost companionship.

Certain acts of a wrongful death occur due to negligence, however, other actions are also considered in these cases. Owing to such actions, the survivors of the deceased file a lawsuit against the offender. The death of the deceased person provides compensation to his or her family members.

The procedure of a Wrongful Death Lawsuit:

Laws have changed regarding the way the family members of the deceased seek compensation. Despite the fact that the person at-fault, whose actions caused the death, is not sent to the jail, however, he or she is still held responsible to pay for the compensation through wrongful death lawsuit. Such compensation can also include, mental, emotional anguish depression or issue of the similar nature.

The person who files the lawsuit is most often the representative of the deceased person- he or she can be someone who is connected to the estate, family member or any dependent of the dead.

The Initiation of the lawsuit:

The way a person dies is most often the reason why the representative of the deceased file a lawsuit. Filing such lawsuit differ from state to state. Such actions include intentions, negligence, or accident of some sort. In case the victim was tortured or tormented before his or her death, the additional relevant actions can also be taken. Although every state has its own wrongful death laws that hold the culprit responsible, it may be difficult to gauge without consulting a wrongful death attorney who is included in the compensation in an unmarried relationship.

According to the US version of Lord Campbell’s Act regarding wrongful death, the lawsuit can be sought only by the designated beneficiary. Such a person can be anyone specified in the statute having some sort of primary relationship with the deceased. In many cases, the romantic partner is considered the person to file a lawsuit. Moreover, the right to sue and benefits are given to the relevant class.

In the case of first class, both partners are dead, these rights are transferred to the next class. The class dependents refer to the primary, secondary or tertiary relations closest to the dead person. First class refers to the husband or wife or children- adopted or birth. The secondary class can include siblings or grandparents; the tertiary class refers to another distant relatives. In case there is a survivor, the wrongful death lawsuit is not initiated.

Although, the spouse of the deceased handles his or her estate, however, in a few circumstances, an unmarried partner can bring forth the lawsuit. In order to determine this aspect, the assistance of an expert lawyer is needed. In addition to it, when the person seeking compensation does not come under the first class of beneficiaries, he or she may need legal assistance in case such rights are denied.

Author Bio:California Sexual Harassment Attorney have dedicated their lives to the craft and stand by your side throughout the entire case, should you have any questions or concerns about the process.